This was not a trip for counting calories. For an island that’s relatively small (the size of Massachusetts according to Frank), we were surprised at the variation in food from place to place. Each town had their specialties and we were happy to indulge. Warning: Virtual food coma ahead . . .

Breakfast of champions – standard Sicilian breakfast of cappuccino and granita, an Italian ice

They also do a lot of baked goods for breakfast — croissants, donuts

I made sfingi (Italian ricotta donuts) one morning

Chocolate inside chocolate cake donuts — what a concept!

Mom made crepes with Nutella for Andy

When in Italy… no Mr. Coffees for us. 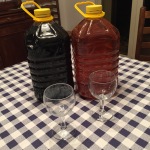 When asking for a glass of wine at restaurants, your only choices are red or white — all local, inexpensive and delicious!

I wonder if this was a variation on the Busalacchi name.

One of my favorites – Nero D’Avola from Avola(!)

Fig tree in our yard provided a fresh treat!

For Frank eating at 7:30 was a stretch. Even then, we had the restaurant to ourselves as they didn’t get hopping until 8 or 9.

In Sicily, it’s all about eating fresh and local. Local meats and cheeses make up an antipasto tray.

Pasta ala Norman with eggplant and ricotta is a Sicilian favorite

Pistachios are grown in Sicily and having them in pasta is a local favorite in several areas.

Pasta with pistachios in Trapani

Fresh seafood is king along the coast

Involtini (spedini) are ready made and delicious!

Italian sausage (of course!). We also saw it sold in coils on a stick, ready for grilling.

Arabic influence in Trapani – the kabobs were amazing!

There are separate bakeries for bread and some cookies.

Pasticcerias were where the fancy desserts were sold. They often served coffee and liquor, too.

Scardellini are “bone cookies,” served around the Day of the Dead/All Saints feasts

When you bought the bakery, they wrapped it like a present!

The happy baker in Syracusa with her yummy pistachio coffee cake

And, of course, gelato

The only thing better than traveling is sharing that adventure with family. For the past three weeks, we have hosted a revolving door of relatives at a mountainside villa overlooking the seaside town of Capo D’Orlando, Sicily, home of Frank’s maternal great grandparents. The ten-minute drive, up the curvy mountain road, took us to L’Aquilone, our base from which we explored the area and searched for signs of his ancestors. We ate well, drank a lot of local wine and enjoyed endless laughs around the massive dining room table.

Frank and I had a few days to settle in before the first wave of family arrived. The sleepy (in October) resort town, where everyone knows everyone, discovered fairly quickly that some new Americanos were in town. Could it have been the nine-person van squeezing through the narrow streets while residents whizzed by in tiny Fiats and Smart cars? Or was it our feeble attempt at speaking the local language, along with hand gestures and Google translate? If that wasn’t it, perhaps it was our trip to the local grocery store on our second day in . . .

Frank and I had proudly navigated exactly what we needed for the evening’s supper and, as we were paying for our groceries, the cashier asked us if the van outside was ours. We answered, “Si,” wondering why she asked until we went outside and saw the back end of a rooster and scattered feathers between our front tire and wheel well. Everyone was staring at the perplexed Americans who unwittingly “killed” a rooster. Figuring there wasn’t much we could do — Frank certainly wasn’t going to clean it out of there(!) — we slunk back inside the van and started it up. Suddenly, a man ran out waving his arms, “No morti! No morti!” Confused, I climbed back out and the rooster had disappeared. All that was left was a of couple feathers!

We picked up my mom, Frank’s aunt Jo and three of his cousins the following Sunday. They couldn’t have been easier or more enjoyable guests. We visited Aunt Jo’s relatives in San Agata before leaving her with them for the day. We also took a trip to Portacello to meet Fay and Rose’s first cousins and to see their mother’s childhood home. The extended families warmly welcomed all of us and it was interesting to view their homes and see how Sicilians live. They fed us until we were “molti chinu” (full!), which was a running theme of the Spano stay!

The Spano visit went by much too quickly and before we knew it, they were gone and we were picking up Louie, Andy, Nick and Maddie. Like myself, Frank was really looking forward to spending time with them. All had left busy schedules back home and were anxious to savor some good food and wine, relax around the pool, sightsee a bit and enjoy late nights playing sheepshead. We dropped everyone at Taormina one day, telling them we had to meet a friend in Catania for coffee. Unbeknownst to them, we went to the airport to pick up Andy’s girlfriend. The unplanned surprise was the torrential rainfall we hit along the way, turning an easy 30-minute ride into a detoured 4-hour odyssey through flooded towns. It was, however, all worthwhile to see Andy’s face when the cute girl behind the camera turned out to be someone he knew. : )

L’Aquilone, which means “the kite,” our home in the hills.

Fig tree in our yard provided a fresh treat!

The 9-seater van was perfect for people hauling but difficult for navigating narrow streets (and driveways!).

The Spanos and mom were our first group of visitors.

So happy to have the boys and Maddie in Sicily with us!

Nick and Maddie in Catania before heading back to LA.

Frank and I were detoured off the autostrade due to flooding.

The floods and subsequent truck traffic made the streets buckle.

Sicilians park every which way on the street, making you wonder if you are on a one way street or ?

Our friend Tanina from Pasticceria Giulio. She learned English from the lady whose home we rented!

When asking for a glass of wine at restaurants, your only choices are red or white — all local, inexpensive and delicious!

The Church of the Black Madonna at Tindari.

The Black Madonna at Tindari.

View from the L’aquiline pool of the Tyrrhenian Sea and the Aolian Islands.

A highlight of our stay at L’Aquilone were the dinners cooked by Tano, with help from his sweet wife Sara,

Andy and Shannon took the ferry for the day to Lipari, one of the Aolian Islands.

Island of Lipari, one of the Aolian Islands.

Shannon loved all the cats on the island of Lipari.

Andy cruisin’ the island of Lipari.

The mountainous north side of the island has many tunnels for the autostrade.

Nick and Maddie in Cefalu.

Capo D’Orlando procession down the hilltop church to the church in the town.

Capo D’Orlando procession down the hilltop church to the church in the town. Tents line the streets for the 2-day festival, which culminates with fireworks.

Kept seeing these necrology signs along the roadways. This is how they publicize area deaths.

At Sicilian cemeteries, you will often find one or more flower vendors outside the gates.

Grave records are not computerized but are kept in large hand written volumes.

A Busalacchi grave in Termini Imerisi. Perhaps solved the mystery of why Frank’s dad’s middle name was Stanley?

Community gathers at Ottobrefest, taking place in small towns all over Sicily. We attended the festival in tiny Floresta, which featured mushrooms that weekend.

Best view, best place to get a cocktail in Taormina.

Leave it to the boys to find an Irish tavern on a rainy day in Taormina!

A wedding in Taormina.

Beach at nearby San Gregario.

A rainy, windy day at L’Aquilone.

Relatives of Spano girls in Portacello.

The feast prepared by the Spano cousins.

Mosaics for sale in Monreale.

Monreale Cathedral near Palermo, known for its mosaics.

Monreale Cathedral near Palermo, known for its mosaics.

Many in Milwaukee go to the town of Portacello during their religious festival in early October. This is the statue of Mary they carry through the streets.

A rolling Metro Market, the loud speaker announces he is in the neighborhood and residents come out to buy necessities.

Everywhere we went the older men were hanging out on benches, in groups. Where are the women?

This guy had love at first sight for Josephine. We kept running into him and he kept asking for her!

Some of Aunt Jo’s family in San Agata.

A poster in the home of relatives in Portacella. Look at the top closely . . .

Frank’s shirt was “stolen” at the health club and the manager gave him a shirt from the local basketball team. (His shirt was later found in an obscure place by the maintenance guy!)

The first time this guy wore his new Milwaukee Bucks shirt was the same day we walked into his Capo D’Orlando store!

Pinecones, like those on these pillars, are a symbol of Sicilian hospitality.